What is a Distributed Ledger?

A distributed ledger (DL) is a database that is replicated and shared across numerous computers, allowing individuals or institutions to securely verify and record changes to the shared database without the need for a trusted intermediary. Distributed Ledger Technology (DLT) is a term capturing any technical means of achieving this.

To understand this further, a ledger is a record of transactions, balances, and positions. These don't need to be purely financial but could be a record of any asset (e.g. gold, car, shares), inventory item (e.g. raw material, manufactured good), social transaction (e.g. votes) or even measurements of less tangible concepts such as reputation or popularity (e.g. re-tweets on Twitter, TikTok followers).

Ledgers date back to ancient times, indeed some of the earliest writing that we have depict accounts of trading [1]. Taking many forms over history, a ledger eventually became a hardbound paper book with double-entry columns, giving books of that style their common name. At the end of the 20th century, accounting started to digitise, securities became dematerialised, and then the advent of online banking meant that ledgers were now in electronic form. Distributed ledgers are the next evolution in the ledger’s long history.

The word distributed relates to a network and should be treated as distinct from decentralised [2]. A centralised network has a single entity connected to all other points in the network (each point is known as a node) storing and controlling information on that network. A decentralised network stores and shares control of data between different nodes. Some of these nodes may be local hubs for satellite nodes. This is how the internet is laid out, for example. A distributed network spreads the data across all the nodes in the network, so each node has a copy. A distributed network could have its data synchronised either centrally or from multiple locations.

Each node on the network keeps its own record, independently updating that record automatically for new entries or changes to the ledger. This means that the data on the network can recover very quickly, or avoid impact altogether, should any single node be corrupted or destroyed. The trick is ensuring that each node can reliably capture the same information without interference from un-trustworthy actors, and in a way that transactions will be transparent and unchangeable. There are multiple ways this could be done, with blockchain technology being one of them. Blockchain technology will be covered in another one of these explanatory articles, but for now, the key takeaway is that all blockchains are distributed ledgers, but not all distributed ledgers are blockchains.

See ‘In Pictures’ below for a diagram depicting the difference between a centralised ledger and a distributed ledger published by the BIS.

Distributed ledgers are not new, and many organisations already keep multiple copies of data in different locations as backup. It is precisely the advent of technologies that improve the ability to reliably synchronise the nodes in a decentralised manner, meaning that no one central authority is necessary. That advent has reawakened interest. For now, let us look at a centralised distributed ledger that is now ubiquitous in everyday life.

"What time is it now?" You may have instinctively looked at your watch, though increasingly a mobile device is where you would go for the answer. Time is a measurable quantity, and its ledgers are watches, clocks, mobile devices, and so on.

"Which time would you rely on if your wristwatch and your mobile device showed different times?" The latter most likely, indeed the wristwatch was probably set by you based on the mobile device at some point in the past. "Why is that?"

We trust our network provider to have the correct time, or at least that all of us with mobile devices connected to that provider will have the same time as each other. ‘Correct time’ thus is essentially shorthand for ‘the time most people agree based on their time ledgers’. In fact, even between network providers, we expect the time to be the same, as the network providers will receive that time from the national time signals that are broadcast (for example, by the NPL in the UK [3]). This central authority thus is responsible for synchronising all time ledgers connected to it either via the mobile networks or directly (there exist time signal-controlled clocks). Thus, when off-network ledgers (standard wristwatches) are compared to ledgers on the network (mobile device), we trust the networked ledger.

Benefits & Challenges of a Distributed Ledger

In short, the primary benefit of DLT is that the redundancy in the network makes the network resilient to failure or error. Each node has a copy of the same information that can easily be retrieved in any of those events.Additionally, since each node has a complete copy of every transaction, full transparency on the history of the ledger’s positions are available.Challenges posed with DLT are: 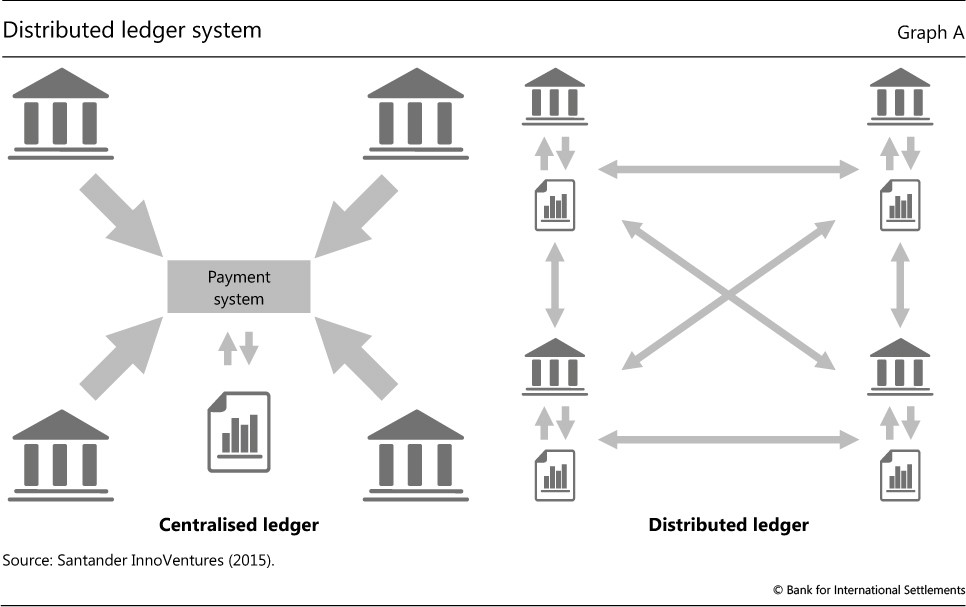 Cointelegraph. 2019. What Is the Difference Between Blockchain and DLT?. [Online] Available here. [Accessed 8 March 2022].