What is a Blockchain?

A blockchain is a type of distributed ledger network that records transactions in a string (chain) of groups (blocks) of transactions. A blockchain is cryptographically secure, decentralised, append-only and updated by a consensus mechanism.

Decentralised has been explained in the Distributed Ledger note. Append-only means that blocks of transactions can only be added to the already accumulated and agreed blocks. Previous transactions cannot be amended or canceled; a concept also referred to as immutability. A consensus mechanism is a method of agreeing across nodes of the ledger which transactions are valid and should be included within a block of transactions (hereafter simply ‘block’). The term cryptographically secure simply means that mathematical methods are used to encode and authenticate the data to ensure that data cannot be tampered with.

In a blockchain, a ‘new’ transaction or block that has been requested is validated by all the participating nodes in the network; all the nodes effectively check if the debited party has enough in their account, or wallet, to make the transaction and that there is no double spending occurring. When the majority of nodes agree, the transaction is added to the chain and distributed across the network. Each block in the chain is mathematically tied to its predecessor thus any attempt by a node to replace or change a prior block can be detected by the rest of the network. See 'In Pictures' below for a diagram showing this simply. Remember that the account of record could hold anything that can be counted: cash, assets, votes, social media likes.

Imagine playing a game of Monopoly with strangers in which you have the board, pieces, and properties, but no paper money. There are however paper and pens, so you all agree to use the paper to record each transaction made between the players to track cash balances of all the players. Everyone will record the same transactions, and track the balances of all players, to be sure that there is no cheating amongst the group.

Monopoly is notoriously lengthy in game-time. Researching disputes through an ever-growing list of multi-party transactions is both tedious, time-consuming, and difficult to maintain. The players thus agree when they reach the end of a page (which they should all do at the same time if they’re recording the same information) they will each sign all of the pages and use the closing balance of that page as the starting balance for the next page. This means that transactions can be tracked on a page-by-page basis. The signed pages are stapled on to the top of each player’s stack of pages and put aside.

Should there be an attempt at any point for a player to manipulate their current balance, by say attributing their own account to have more money than they really have, then only page starting and end balances can be compared for transactions prior to the current page. If that player has also substituted a false page to back up their false balance, the other players can quickly check whether that false page has all players’ signatures on it, which will of course not be the case, since each page is fully signed at point of agreement.

In this, admittedly drawn-out analogy, the players are nodes in the network, each page is a block, the signatures act as the cryptography, and stapling the next page to the top represents the append-only nature of the chain, which is the full batch of completed pages.

As noted in the Distributed Ledger topic, this relatively complex concept (a blockchain) is designed to keep a decentralised network synchronised when there is room for distrust between network participants, usually, because participants are strangers to each other, or as in the case of the best known public blockchain supporting Bitcoin, are anonymous. Private blockchains, of the sort run by financial institutions, generally follow Know Your Client (KYC) rules and thus participant nodes are known and permissioned by the authority running the blockchain. This means that some of the measures above, like the append-only condition, may be relaxed, but this will vary from chain to chain.

Since consensus mechanisms determine which transactions are successful and recorded into the chain, there generally needs to be an incentive for nodes to validate and authenticate transactions. Normally this reward is in cryptocurrency (please refer to relevant briefing paper) or another digital asset. The reward also serves to keep nodes honest. There are two primary consensus mechanisms in use (others exist): Proof of Work (PoW), and Proof of Stake (PoS).

PoW consensus involves nodes calculating the solutions to the mathematical problems that make up part of the cryptography process [1]. When a node finds a solution, it is rewarded. Bitcoin runs on a PoW basis. The energy expended by computers in making these calculations can be extremely costly [2] and environmentally damaging. There is an active debate regarding blockchain's sustainability impacts however, like many challenges, compensating benefits or outright solutions do exist.

PoS consensus requires nodes to stake some cryptocurrency or tokens [3] essentially a pay-to-play model. Again for validating and authenticating transactions a node will earn more, but should the node prove to be dishonest then their stake is forfeit. The probability a node is chosen to add the next block to the chain is proportional to the amount a node has staked. The other main public blockchain, Ethereum, has been proposing a move from a PoW mechanism to a PoS mechanism for some time [4], PoS being more environmentally friendly in that there are no large energy requirements.

Each blockchain will run on its own mechanisms and technological rules, which can mean a lack of interoperability between chains [5]. Solutions do exist to try bridge these gaps, and indeed the gap between blockchains and traditional networks, but this means navigating the full spectrum of chain solutions available can be quite daunting.

Since blockchains are a type of distributed ledger, the implications of blockchains for the industry are essentially the same as those outlined in the Distributed Ledger explanatory document.

The primary areas of impact operationally are:

As alluded to in earlier sections, blockchains also introduce the concept of new asset types, assets that exist purely on the blockchain itself: cryptocurrencies, tokens, and digitally issued securities. Each of these will be the subject of another explanatory note in this series.

It is important to re-iterate that while much of what has been described here, with respect to the underlying blockchain technology, was designed to allow for public transaction networks in low-trust environments without the need for a central authority, the majority of blockchains within the industry will be privately operated [6] permissioned networks. This will therefore likely have some centrality baked into their consensus mechanism (e.g. only certain node types will have permission to validate and control transactions on the network).

Care should be taken when looking to utilise a DLT solution. For instance when considering, does the application or problem you are looking to solve require the level of redundancy and resilience afforded by a DLT, along with its challenges as set out above? A guide to assessing the risks and choosing a DLT or blockchain solution was recently published by the CSSF [7]. 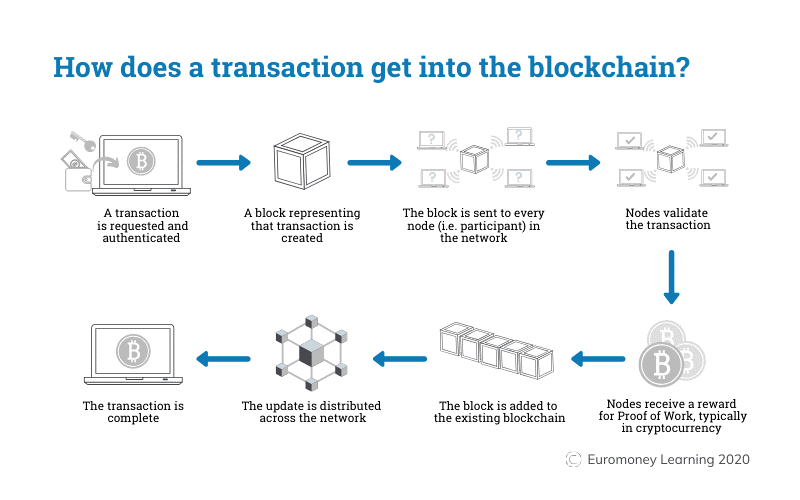 A simple diagram of how transactions get into the blockchain. Source.